This is a story about the hubris of mankind, the European Union version of mankind.

According to the bible a few thousands years ago men decided to build a tower that will reach the sky. That attempt was foiled by the introduction of different languages thus not allowing communication between men which was necessary for the successful venture. 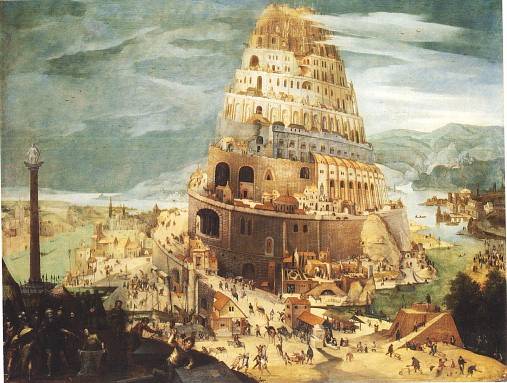 The picture is from an internet assay: THE TOWER OF BABEL AND THE CONFUSION OF LANGUAGES by Lambert Dolphin

Since then mankind built many sky scrapers and learned to communicate in a multi-lingual world. So what was the lesson of the Tower of Babel? The lesson was that of hubris not that of engineering. Unfortunately that lesson was not well learned by some and specifically in this case by some in the European Union.

About 50 years ago some talented and important leaders in Europe which was still emerging from the horrors of WW II got together in Rome and decided that in order to continue the remarkable recovery of the western part of the continent from the devastation of WW II they should create an Economic Community that will flourish under the wings of the security blanket provided by the USA via NATO and that will use the vast grants of the Marshal Plan (given by? the USA who else) to the best possible use. The idea was noble, a good one and proved to be very, very successful. For the next four decades that idea developed from the Treaty of Rome to the European Economic Community. It played a very important role in supporting the USA in its fight against communism and has proven to be a rock of stability in a continent that knew much devastation and suffering.

In the last few weeks however, the people of France and The Netherlands, both part of the original subscribers to the treaty of Rome, lent the EC a body blow by rejecting the European Constitution. So what went wrong?

The lessons of Babel were not learned by some. To be fair the move from a great idea towards Hubris started already in the 1980s when officials of the EU, mostly French with the support and push from France itself (the most powerful member of the union at that time) decided that they will build themselves their own Tower of Babel. That tower was supposed to be the United States of Europe, officially a “counter balance” to the power of the US, lately another pole in a “multi-polar” world (with the US being the other pole and who else? Maybe China but on this, another time). All kinds of lofty buzz words were used but in essence the real purpose behind it all was the resurrection of the French Empire. The French could not accept the fact that their “superior” culture and language (one has to admit that their food and wine are superior, but they should stick to what they are good at and not try to interfere in world affairs) would be dwarfed by the “up-starts” and “simple” culture of these “newcomers”– the USA. So what can one do? Let’s build our own “Tower of Babel”!! Let us take 25 different countries (currently and counting) with 25 (or actually more) different languages and more importantly 25 different cultures and impose on them our (the French) view of the world. Is that not a great idea? We will create a counter balance to the USA where we (the French) will be the dominant power and all will be fine. We can drink wine and eat good food and the French language and culture will once again reign supreme. So they decided to take the Economic Community and make it the European Union. Unfortunately yet again God or the gods of the economy (the strongest human power on earth) saw this for the Hubris that it was and decided to foil it.

Growth- the EU had very little growth for about 10 years. The USA grew significantly during that period.

Productivity- As above, the USA’s rate of improvement in productivity puts the EU’s to shame.

Unemployment- this is something the EU scores very highly on- that is a high rate of unemployment- over 10% consistently for the last 10 years or more.

Military power? You must be joking, what military power? The combined power of the EU is not equal to the military strength of Turkey let alone its supposed “multi-polar” equal such as the US and /or China.

These indicators are for the EU as a whole. If you analyze the real core drivers behind the move from economic to political union such as France and Germany, the picture is even worse. So what did the mandarins of the EU decide to do when they saw a few years ago that things are not going the way they hoped, when France noticed that it is losing the grip on the direction of the EU? Let us have a constitution they said. So they organized a committee to write the constitution chaired by? A Frenchman of course, an ex president of France.

About 218 years ago 55 people got together in Philadelphia and produced one of the most important documents the world has ever seen and probably the most important since it was written- the constitution of the USA. It took them about 4 months and they produced a document which would fit probably into less than 10 A-4 size pages even if you wrote it in double spaces (including all the amendments since then). Yet the great and the good of the EU, having the benefit of the USA document as a successful example took a few years and produced a document over 400 A-4 pages long!!!!! Is this not Hubris???

Is it no wonder that the PEOPLE rejected it, yes the people. A strange concept for these French mandarins who have for long considered themselves as knowing what is best for the “people” on whom they looked at from above with disdain.

So what is the moral of the story? The moral is that one can not take 25 different nations and make them one, not economically and certainly not politically. The great phenomenon that is called the United States of America can not be duplicated. The US started from nothing and grew together. Any effort to replicate it will end in the Tower collapsing.

Does it have any direct effect on the hotel industry; no, but then so what? I did “promise” you that I will write on anything and everything and I had nothing better to say so I thought I will tell you what I really think of the French!! By the way France is still a beautiful country and their food is superior in my own humble opinion. That does not make them better than others, although they do make that error quite often. On the serious side, if the EU will take a few steps back and revert to being an ECONOMIC community concentrating on improving the economic performance of its members and stop meddling in world affairs, both areas of the world will benefit; economically from the better performance of a major trading area and politically by leaving the serious business to the big boys. I hope they will learn, but knowing mankind especially the French kind- I doubt it.

Until next time – good bye.